We started out the month of October (SpookFest) with an article I wrote for Paranormal Rag (an online magazine) about Ouija Boards. Below is the follow-up article…because honesty, ouija boards are fascinating…scary, but fascinating. 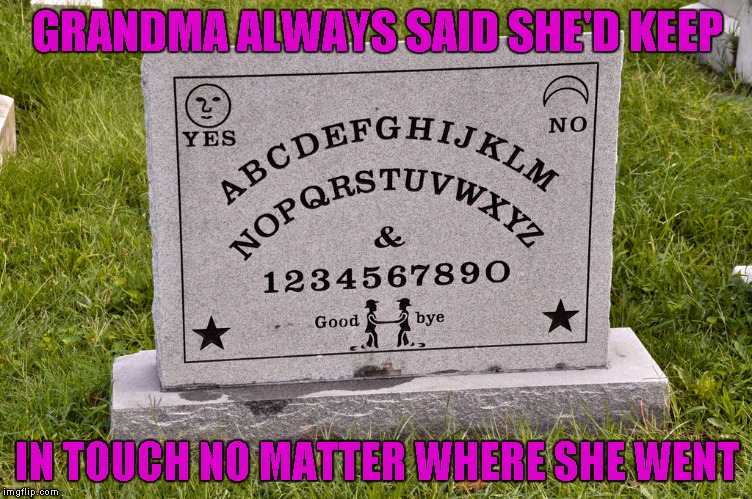 Last time we discussed the history and a possible scientific explanation of the popular board “game” – the Ouija Board. It started as a simple board game for family entertainment, even though its origin was more supernaturally inclined.

Now I want to share true stories of just how dangerous this seemingly innocuous game can be.

A Ouija board, also known as a spirit board, is a flat board with letters of the alphabet written across in big arches, numbers 0 through 9 listed on a straight line underneath the letters, two words in the top corners of the board (“Yes” in the upper left; “No” in the upper right), and the words “Good Bye” centered at the bottom (sometimes the board also has “Hello”). A small triangle, sometimes heart-shaped piece of wood or plastic, called a planchette allows the participants to place the tips of their fingers on it and it guides them to spell out the answers to their questions.

Currently, Hasbro, Inc. (a toy manufacturer) owns the trademark and you can find the board game in the non-electronic games section of Walmart, Target, or even order online from Amazon. After researching for this article, I found there’s even Ouija apps for phones.

Can something so widely distributed and touted as a family game since its commercialization in 1890 actually be quite sinister?

In addition to being the basis for the possession of a little girl in the movie, The Exorcist, (which was based on a true story), there have been numerous reports of spooky, and even dangerous, encounters with the Ouija board. 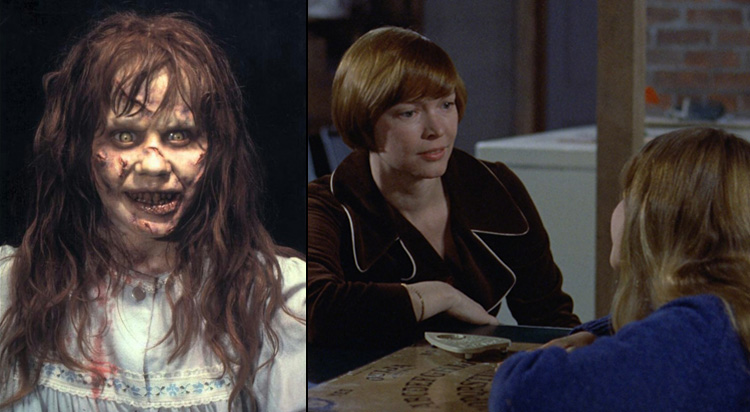 One Reddit user’s experience was posted in Cosmopolitan magazine in 2016. She and her now ex-boyfriend used an Ouija board to attempt contact with a friend of his that had recently died. They got more than they bargained for when the spirit was more than anxious to speak with them. They stopped the session which seemed to anger the spirit. The planchette began moving on its own very rapidly, not even spelling out words. The atmosphere became heavy and oppressive, making the living persons in the room exhausted. The woman fell asleep for a few minutes. When she woke up, a dark shadow figure rushed at her and was screaming. She claims it felt like the apparition was trying to get into her body. After running from the house, the woman has sworn off Ouija boards forever.

One woman in West Virginia retold a story of using an Ouija board with her mom one night when she was just a pre-teen. She swore her mom was moving the planchette, although her mom equally swore she wasn’t. The spirit identified itself by a name neither recognized. When they asked how the spirit died, it did not answer so her mom attempted to say “good-bye.” The planchette moved to the word “No.” Her mom again said “good-bye” and the planchette moved to the word “good-bye” as well. However, that’s when it started to get weird. The woman (young girl at the time) began to hear growling in a corner of her bedroom at night. Her father did not hear it, but her mother did. Also, the mom’s cigarettes began to have a rotten egg smell (Sulphur smells like this and is commonly associated with demons). A few days later, her mom became very ill and was hospitalized with a nasty infection. After that, the growling stopped.

A couple teenage girls lost almost ten hours of their life using the board. They started a session with the Ouija board around 9 pm and after a few questions…it was 7 am. Neither recalls what happened after the first couple of innocuous questions.

People have reported shadows, voices, strange knocks and other sounds after using an Ouija board. However, some have also reported being assaulted – scratched, pushed, choked, and held down unable to move.

Doesn’t sound quite such an innocent game now, does it?

There have been countless stories of people throwing away, destroying, and even burning their Ouija boards and/or the planchettes (or homemade devices used as planchettes), but then the items turn up again, and along with it – dark shadows, disembodied voices, and a general sense of heaviness in the air.

Regardless of your own personal opinion of Ouija boards, and possible scientific explanations to how it works, there are enough reports of negative experiences both during the use of the board and long after the session is over to make goosebumps rise on even a skeptic’s skin.

For those of you daring individuals who break out one of these boards for any reason, please take care. Some safety precautions include:

Just a few easy steps to make your Ouija board experience fun and safe. If you don’t, you may want to avoid it altogether. Don’t risk what happened to those persons whose stories are above happen to you.