Continuing our haunted tales series for the month of October, how about an opera performance from spirits of the early 1900’s? 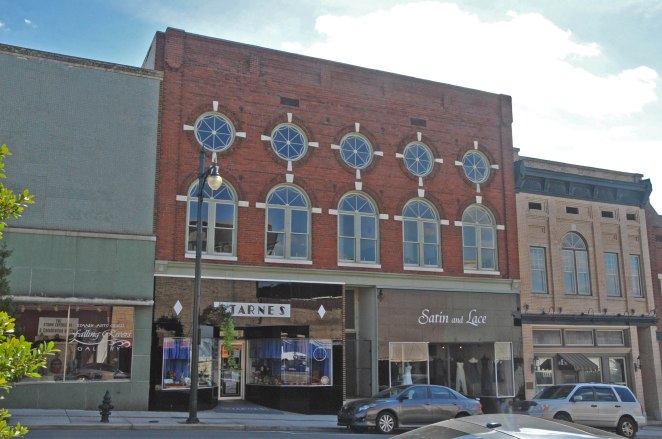 Although closed for over one hundred years, the building that housed the grandest theater in Albemarle, North Carolina has also experienced the highest level of paranormal activity in the state.

The Albemarle Opera House opened in 1908 and closed seven years later in 1915, shortly before the greatest flu pandemic of the twentieth century struck in 1917. Although vacant, many report that the building is not exactly uninhabited.

An apparition of a tall man in a dark suit and hat appears on the stage and in the balcony of the old opera house.

A lady in a white flowing dress graces the stairs going up to the balcony. Shadows of people dance across the stage.

Voices of a little boy and a little girl can be heard in the balcony, with the little boy confiding that he likes to play tricks – according to the owner of the building, the little boy does just that quite often.

Locked doors unlock themselves and open, much to the chagrin of folks looking for privacy in the bathroom of the jewelry store now located on the first floor of the building.

The sound of footsteps in the balcony and in other parts of the building when no one is there.

Once during a rare performance in the opera house for the local historical society, a female singer felt someone brush against her on stage while she was singing.

All point to one conclusion…the Albemarle Opera House is one of the most haunted sites in North Carolina.

The building was constructed in 1907 with the opera house opening in 1908, along with Huneycutt’s Furniture Store, Starnes Jewelry, and Hall’s Pharmacy. All of the various businesses there have experienced some form of paranormal activity.

The opera house’s claim to fame is that Thomas Edison visited the theater and provided a music concert with his first phonograph. The current owner, and grandson of the original builder and owner of the property, confirmed that there was a musical performance using one of Edison’s phonographs, but there was no evidence that Thomas Edison himself was present at the time. Regardless, the building hosted traveling shows, including magic shows, plays, and even comedic operas until it closed in 1915.

However, the building itself has its own intriguing history. During the pandemic of the Spanish influenza from 1917 until 1918, there were so many deaths that Huneycutt’s was used as a funeral home. And when space ran out, they cut out a wall from the mortuary and used the theater as a morgue. Some of the deceased awaited burial while stored just off the stage of the opera house.

According to the building owner, one of the fun aspects of working in the building has been the playing of music from the vacant theater. Albemarle citizens report you can hear the band from October until March, what would have been a typical season for musical performances in the theater.

The ghostly happenings aren’t limited to the opera house. Disembodied voices can be heard in Huneycutt’s Furniture Store and sometimes items move by themselves. Employees refuse to be alone in the building at night. The jewelry store computers and other electronics cut off and on; store merchandise (and personal belongings) are moved and hidden; and the store clocks chime in unison, but not on the hour. Hall’s Pharmacy was turned into a restaurant where employees and patrons claim items move on their own. An apparition similar to the well-dressed man in the opera house has been reported to be seen in the restaurant as well. When an employee followed the man upstairs to tell him no one was allowed there, he found the space empty.

Several paranormal investigators have been in the Albemarle Opera House. They’ve captured orbs on camera (a common indicator of spirits), picked up sound waves in response to questions, and experienced up to thirty degree drops in temperature. The most convincing experiment by a paranormal group consisted of twelve flashlights on the stage. While the investigators sat over sixty feet away and asked questions, the flashlights were turned on and off in apparent responses to their queries.

No one has ever complained of sensing anything evil in the building. Several paranormal investigation groups have conducted hunts there, and none reported anything malevolent. The building owner also stated that, at least in his experience, all the ghostly encounters have been associated with the opera house, nothing to do with the vast number of deaths from the flu. This was also the conclusion of the paranormal groups who have visited the opera house.

The Albemarle Opera House may not be open for business any longer, but that doesn’t seem to stop the musical performances. If you’re lucky, you may catch a ghostly concert walking by the building, having some good food in the attached restaurant, or perusing the sparkling jewelry in Starnes Jewelry Store.