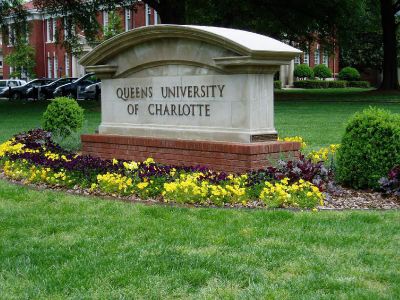 The past few years I had opportunities to visit college campuses across the southern United States as my oldest son looked for his “home” for the next four (at least) years. I adore the older campuses with the weathered brick buildings and towering tree-lined quads. While my son was more interested in the sports teams and what his social life would be like, I soaked up the atmosphere and listened to tour guides regale us with the school’s history. Sometimes that included a ghost story or two. Now, being so inclined to cling to every word of a ghost tale, it got me to thinking – universities have some of the best ghost stories and those stories should be told to a much wider audience. So…I decided to dedicate at least one article an issue to haunted universities. Let’s face it – what college over two years old doesn’t have some rumored paranormal activity?

Queens University was founded in 1957 in the heart of Charlotte, North Carolina. It’s a small campus that you may miss driving by if you blink. But it is prestigious and a bit pricey. Initially, it was established as the Charlotte Female Institute            and then changed to the Seminary for Girls from 1891-1896. The university then merged with the Presbyterian Female College. In 1912, the new college moved to its current location in the Myers Park neighborhood. After World War II, the college admitted its first male students.

Long before Queens University was founded and much earlier than its move to its current location, the land experienced events that scarred it and led to tales of Civil War ghost battles playing out in the student courtyard at the center of campus. Students have reported blood-chilling screams and sounds of gunfire out on the courtyard and at Burwell Residence Hall.

Checking into the history of the land, there were no reported battles fought at the site. However, two facts support the claim of possible Civil War ghosts haunting the campus. First, the Confederate President, Jefferson Davis, fled to the area when the Confederate capital of Richmond was overtaken by the Union army. Second, the Confederate Naval Yard was moved from Portsmouth, Virginia to Charlotte in 1862. Either incident could account for the ghost soldiers.

Due to no actual reported fighting on the land, I sought to verify the claims by asking some current students, who wish to remain anonymous. Most have never been in the campus courtyard after midnight and thus had not heard any ghost battle noises. However, one enterprising young man, did venture out there after my inquiry. Although he did not see anything, he did hear muffled yells. Whether this was rebel soldiers re-enacting their grisly deaths or real people off in the distance, he refused to speculate. But he also said he would not be going out to the courtyard after midnight ever again. There have been enough reports of the phenomenon to grant it some credence so we won’t rule out the possibility of Civil War ghosts in the courtyard just yet.

Some past students at Queens University have reported seeing a dark apparition of a man hanging from a tree in the courtyard. Initially, this was attributed to the Civil War era as well. New information contradicts the timing though. As most of the other ghost stories of the college, it revealed that a student hung himself. Since the school was not co-ed until after World War II, his death – and subsequent ghost – would not be connected to the war.

Aside from the “ghosts with a rebel yell”, Queens is plagued with ghosts of suicide victims. The most frightening haunt being a young woman who slit her wrists in the Albright Residence Hall in the 1800s. Rumor has it that she was humiliated and distraught after her family discovered she was having an affair with another woman. Being the time period, that behavior was more than frowned upon so the family wasn’t quite understanding of the situation. The poor woman killed herself in her dorm room. There have been reports of loud knocking sounds inside the walls of that particular room and the door flies open of its own accord. It is even said that the lover’s name, Julie, appears on the wall above the bed as if written in blood.

Another chilling ghost tale of Queens University residence halls involves Room 303 of Hall Brown (also known as Overcash Hall). A student woke up during the night to see her roommate slumped over the desk. She tried to wake the girl only to realize her roommate was actually still in her bed. The figure at the desk sat up, looked at the girl, and promptly vanished when the resident screamed.

In the Belk Residence hall, a student was shaken awake. When she looked around the room, the desk was violently vibrating back and forth. It stopped when she got out of bed to check. About an hour later, the same shaking disturbed her sleep again. The student did what any self-respecting person would do – she made to run out the door. But this prankster ghost had other plans. The woman stared in shock as the door locked by itself. Then the face of a young girl manifested on the closet door. Three years later, another student reported seeing an apparition of a girl peeking out from the same closet door.

Wallace Residence Hall also has reports of strange things happening in a particular dorm room, including banging sounds and cold spots. However, to prevent students being scared of their room assignments, the room number has been kept secret.

It’s not just the dorm rooms at Queens University that house ghosts. Students often go to practice their musical performances in the Suzanne Little Rehearsal Hall underneath Dana Auditorium. Many have reported seeing a well-dressed ghost lady pass them and then vanish.

Queens University has a long history of paranormal experiences, easily making it one of the most haunted places in North Carolina. If you visit the Queen’s City of Charlotte, be sure to take a tour, especially if you have a child looking for a fabulous university and you don’t mind forking out over $32,000 a year. The student guides won’t unveil all the ghostly secrets of the university, but feel free to ask any students roaming the courtyard. Just make sure those students are corporeal.