Probably one of my favorite quotes of all time comes from Chuck (aka God) on the tv series Supernatural, which coincidentally is ending soon. I’m too heartbroken to discuss Supernatural ending, but ENDINGs in particular catch authors between a rock and a hard place.

Chuck (aka God) from Supernatural says it best:

“Endings are hard. Any chapped-ass monkey with a keyboard can poop out a beginning, but endings are impossible. You try to tie up every loose end, but you never can. The fans are always gonna bitch. There’s always gonna be holes. And since it’s the ending, it’s all supposed to add up to something. I’m telling you, they’re a raging pain in the ass.”

This is true not just with tv shows and movies, but books…especially series. You (as a reader) commit your time, your energy, your imagination, your heart and soul to a story and then the author either leaves you hanging with a cliffhanger only your imagination can fill in, or tries too hard to wrap it all up in a nice HEA (Happily Ever After) bow, or leaves you unsatisfied in some way that perhaps even you don’t understand. You just know that you are not happy now that it (the story) has ended. Sometimes, it really is just the fact that something you love has come to an end that there’s a huge hole in your heart. Regardless of the why, ENDINGS SUCK!

This discussion all started with a Facebook dialog on another author’s page and it really has me mulling things over hard, especially as I’m currently editing Book 3 of my own series (which was supposed to end with Book 3, but even I – the author – am not satisfied with the ending so I’m busting this baby out to at least 2 more books after #3 ~ much to the chagrin of the other stories swirling around in my noggin desperate to get out). Whereas the conversation on FB was particular to tv series, this also applies to book series.

Most tv series, and book series, have disappointing endings. For one, if you’re a fan of a show/book series, you’re already sad it’s ending. But why are we so emotionally connected to how the series ends?

For example, when Supernatural ends here in a few weeks…unless Sam and Dean are showing up on my own front porch then I will be disappointed because the characters and story have become part of my life. Watching the show has been my “escape” for years. Now what am I supposed to do? Find another show? *Gasp!* The horror of the thought!

I had the same thoughts/feelings when Buffy the Vampire Slayer and the off-shoot series, Angel, ended. Buffy wrapped up in a cute bow with dozens or more slayers now out in the world to protect us all from vamps and other hellish nightmares. What’s not to love about that? With Angel, it was a fantastic smashup, action-packed cliffhanger with the main character (the incredibly hot David Boreanaz) saying, “I kind of want to slay the dragon. Let’s get to work!” and then fade to black. OMG! What a kickass ending, right? Then why was I left with a huge black abyss in my soul?

Let’s take this to books. I just finished a series by one of my favorite authors. Gobbled up each and every book. Got to the end…good guys won! FMC (female main character) and MMC (male main character) live happily ever after! Supporting characters also live happily ever after! Awesome, right? I should be thrilled, right? NOPE! It was all wrapped up too neatly in a bow. Why on earth would I be disappointed when everyone except the bad guys got a wonderful HEA?

Even historical fiction based on real-life persons, I know how it’s going to end, but I’m still like “WTF? Cleopatra DIES! Octavian Caesar wins?!” Ugh!

Endings suck. They just do. Because part of our hearts and souls are connected to the story. It has fueled our imagination for years possibly. So when the inevitable happens…the ending…we are left with a piece of ourselves missing/torn/bruised.

No ending, no matter how HEA (happily ever after) given to us by tv producers or authors, will ever fill that hole, soothe that ache, or mend that jagged rip in our souls. So despite the best intentions of the creators, we will always remain disappointed to some extent.

As I keep writing my own series, dear readers, I am trying to keep you all in mind as I continue creating to get the the inevitable ending. But the truth is, the story must end how the creator sees it in his/her own imagination. Sometimes even we don’t like our own ending, but that’s just where the story leads. I’ve tried to write stories with different endings, different circumstances that didn’t fit with the story banging around in my head, and to be honest…that was always a huge mistake and I always went back and changed things to authentically sync with the story in my own head. The characters wouldn’t have it any other way.

So please don’t lash out at the authors, the tv show creators and producers and screen writers when the book or show or movie ends and leaves you upset or let down. 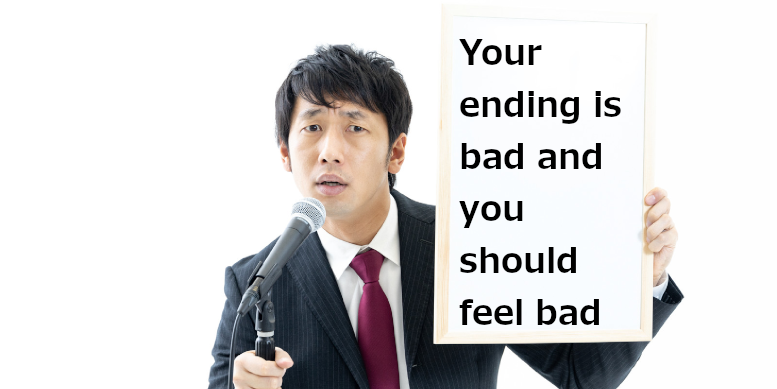 Truly, we are not out here in the universe trying to find ways to piss off the fans. No matter what ending is written, it’s never going to be enough to fill that gaping hole in our hearts because it simply is …THE END!

“No doubt, endings are hard, but then again, nothing ever really ends, does it?”

Maybe that’s why endings are so difficult, either we can’t accept that it is “the end” or perhaps nothing ever really ends. Our imaginations make the story live on.