Who is he? Well, besides sexy and hot as hell…that’s more what he is, not who though.

Jasper is one of my absolute favorite characters to write. He’s not just eye candy, but I may stare at this inspirational photo when I need my muse to help me create his lines, his expression, and his attitude.

You see, Jasper is vital to the fantasy/paranormal story I need to tell in the “Greylyn the Guardian Angel series,” starting with Book 1 “Rekindled Prophecy”.

If you’ll pay close attention to the book cover you will notice that is NOT Jasper on the cover. Must be mistake, right? How can someone THAT sexy not be on the book cover? He HAS to be the love interest, right?

But don’t worry, after this series I have every intention of giving Jasper his very own story because he is absolutely fascinating.

So back to the original question…who is Jasper Moreau?

Jasper is from French royalty (many centuries ago). He’s a guardian angel with a heart of gold and a body for sin. His panty-dropping smile is legendary. A simple come hither look from his ice-blue eyes will have you in his thrall before you even have a chance to blink.

So why isn’t he the heroine’s love interest then?

No one knows exactly. It would seem to make sense that he would be, but things are a bit complicated.

What we do know about him is that he’s a guardian angel and he was the one present when our heroine, Greylyn, dug herself out of her own grave over 450 years ago in the rural fields of Ireland. He took her under his wing and talk her everything she needed to know about being a guardian angel, including who to stay clear of (dark guardians to be precise – which turns out to be much more difficult than either one of them realizes since…hmmmm…Kael is a dark guardian — much more Kael in a later posting, I promise).

Greylyn has kept things platonic between her and Jasper for centuries. Silly girl! And Jasper, being a gentlemen, respects that. After all, humans come and go but guardian angels live on and on. So he’s got all the time in the world.

So why don’t we just let Jasper introduce himself…

Now how to explain Jasper’s arrival and abrupt departure? She’d peeked out the window while she was on the phone. Everyone was assembled under the gazebo except for the bride and her father, the groom … and Kael. They had all seen him come inside her suite.

“Act like we’re arguing but trying to be quiet about it. I’ll explain that you’re an ex- boyfriend making a last-ditch attempt to win me back and I’ve sent you packing…again.”

Jasper’s eyebrows raised inquisitively. “Now who in their right mind is going to believe that?”

The crowd under the gazebo was oddly quiet as Greylyn walked Jasper to his car. No one even tried to feign disinterest as they put their plan into action.

Taking his cue, Jasper began to gesture wildly with a pleading look on his face. Greylyn, in turn, pretended to speak softly, but firmly, hands on her hips for effect along with an occasional dramatic hand gesture. They must have been convincing because her sensitive hearing picked up the shocked comments from the young ladies of the wedding party. The buxom blonde was more than dismayed that the hunk appeared to be leaving.

“Oh, what is wrong with that girl? He’s divine!”

Jasper even audaciously glanced over at the woman and gave her a wink. Sure enough, it gained him what his ego wanted to hear, a soft gasp as she was drawn into his orbit without him even needing to take a step closer. The woman looked as if she’d swoon any second now. One of her friends reached out to grab her by the elbow.

Yes, Jasper had yet another female under this thrall.

“Works every time,” he breathlessly whispered as they reached the car.

If you’d like to read more about Jasper, and the other characters in Rekindled Prophecy…

Check back each week as I introduce the rest of the cast of characters from the Greylyn the Guardian Angel series, inspirations, muses, musical motivations, scene settings, and future plans for these characters.

As a bonus, here’s some more photos of guys I used as inspiration for writing Jasper Moreau. 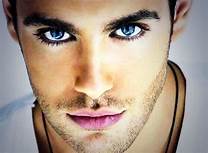