Halloween season also happens to be football season, specifically college football. Where I originate from, the great state of Alabama, the latter season is sacred.

Most colleges have their share of ghostly tales. But the multi-national football champions from the University of Alabama could claim another national title…most haunted campus!

Crimson Tide Ghosts – Hauntings at the University of Alabama

To anyone who even remotely follows college athletics, if you hear “Roll Tide Roll” you know exactly who and what it means. University of Alabama. More specifically, Bama sports. And more likely than not, it’s associated with Bama football. The university and the team are quite famous. After all, they won seventeen national football championships. Most of the country’s college football fans either LOVE the Tide or HATE them. For purposes of this article, I will refrain from expressing my own opinion.

But do you know what else Bama is famous for? 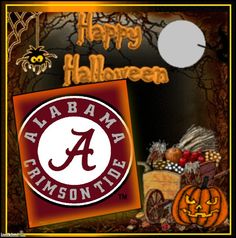 Since its inception in 1831, the hallowed campus grounds in Tuscaloosa, Alabama have experienced trauma and bloodshed (and not always related to football rivalries gone bad).

In the early days, it was common for gun fights to break out on campus. Later on, the university was turned into a military academy to train Confederate soldiers for the Civil War. After the war, it reverted back into an institute of higher learning, but violence still marred the land and gave rise to numerous reports of paranormal activity.

The Little Round House, also known as Jason’s Shrine, was a cadet guardhouse during the Civil War. Three Union soldiers still reside there after their grisly murders. The legend tells that two Confederate cadets stayed behind while the Union army burned the buildings on campus. One cadet was accosted by Union soldiers looking for whiskey. He directed them to the cadet guardhouse where the other cadet ambushed the soldiers and killed them. The soldiers’ boots can be heard stomping around inside the building. When someone ventures in to check out the cause of the sounds, no one is there.

The shadow of a young woman who committed suicide by lighting herself on fire still wanders the 13th floor of Tutwiler Hall. Others experience feelings of foreboding and of being watched in the basement of the same building.

The tramping of horse hooves can be heard throughout the main floor of Smith Hall, located on the Quad, where there is an exhibit of its namesake, Dr. Eugene Allen Smith’s carriage. It is accompanied by the sounds of disembodied horses neighing and horse whips cracking. There are also reports of voices, and when someone investigates, they find desks that had been arranged neatly just moments ago to be in disarray. The room where this phenomenon occurs happens to be a former boiler room where a boiler explosion killed several students.

Marian Gallaway, former theater director, still roams the Gallaway Theater in Rowand-Johnson Hall. Some theater students claim a person can call forth Mrs. Gallaway by standing center stage (alone) and asking her, “How’s my blocking, Mrs. Gallaway?” Her ghost also voices her displeasure if students are not working hard enough by slamming doors to get their attention.

One student claims that after the opening night performance of The Rocky Horror Picture Show in the main theater, one student came up to a group gathered in front of Mrs. Gallaway’s portrait. He remarked that he saw Mrs. Gallaway in the audience and she appeared to thoroughly enjoy the show. When the group laughed and stated that was impossible, he pointed to the portrait and affirmed that was the woman he saw in the audience. He was shocked to discover Mrs. Gallaway had been deceased for some time.

An interesting side note is rampant speculation that Mrs. Gallaway was the inspiration for the character of Blanche DuBois in Tennessee Williams’ play, A Streetcar Named Desire.

What’s a college ghost story without a haunted library? The University of Alabama is no different. The Gorgas Library is still overseen by its namesake, Amelia Gorgas. She mostly haunts the fourth floor, so much so that the elevators have been programmed to NOT stop on that floor. However, students in the library late at night have experienced the misfortune of the elevator stopping and the door opening on the fourth floor.

Mrs. Gorgas is not alone though. Her husband, former University President and Confederate General, Josiah Gorgas, haunts the Gorgas House where he lived and died. Reports include claims of the sound of his sword banging against the walls.

Most colleges have a center of campus, commonly called a quad. Well, Bama students are wise to avoid the Quad on foggy nights. If one is unlucky enough to have to traverse the Quad on such a night, walk fast. Otherwise, you may bear witness to up to three ghosts – a Confederate soldier in full military garb of a Commandant, and two deceased professors whose bodies were cremated and their ashes scattered across the campus.

Following college football as closely as I do, I am surprised to find there has not been a reported sighting of the ghost of the legendary Coach Paul “Bear” Bryant. If anyone happens to come across him, please let me know. There are a hundred plus football coaches that would like to pick his brain for game day strategy. Perhaps that is how Nick Saban is such an amazingly winning coach – is he channeling the Bear? Maybe there’s a Crimson Ouija Board in the field house? (see previous articles on ouija boards)

Whether you love Bama or hate Bama, one thing is clear – even death can’t stop Bama faculty, or students from hanging around campus for their Crimson Tide.