It’s October, so you know what that means…SPOOKY STORIES! In honor of the final season premiere tomorrow night (10/10/19) of my favorite show, SUPERNATURAL – here’s another article I wrote earlier this year for an online paranormal magazine, Paranormal Rag (sadly, it is no longer in circulation).

My biggest pet peeve with television shows and movies is when they don’t follow the
book or super-stretch and twist folklore, myth, or facts for so-called dramatic effect. This
happens most of the time when it comes to horror movies, sci-fi, and fantasy stories, but
especially anything to do with the supernatural. Which is why I was pleasantly surprised to learn something recently that put my favorite television show in even a more favorable light.

Supernatural follows the adventures, or rather misadventures, of demon hunting brothers, Sam and Dean Winchester. Being a fictional television show means they make up a lot of stuff. However, they – at least on the surface – try to keep things straight. Such was the case in Season Five, episode “Swan Song” where Sam essentially challenges Satan to an old-fashioned cage-match of the mind. As Lucifer quoted, “…a fiddle of gold against your soul cause I think I’m better than you.” Satan won round one and booked his forked tongue and tail down to a little boneyard a few miles outside of Lawrence, Kansas for the ultimate championship bout with his archangel brother, Michael. The location? Stull Cemetery. 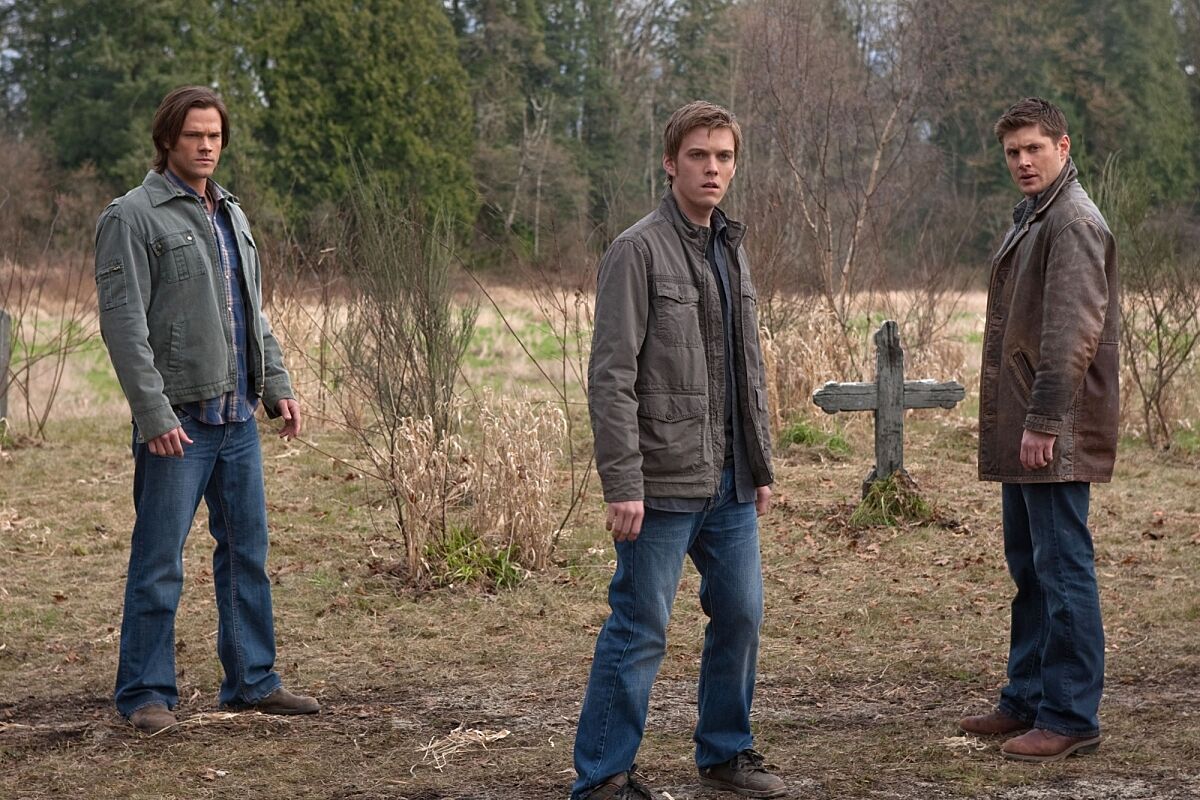 Now this didn’t mean anything to me when I first saw the episode, but a few weeks ago I
picked up a magazine with a list of the most haunted places in the United States. Smack in the middle of the country was a little dot marking Stull, Kansas that caught my attention. Turns out the creators of the show hadn’t just picked a fictional cemetery. They chose the site for Armageddon carefully because Stull Cemetery has quite a history as the place Satan shows up to party two nights of the year – Spring Equinox and Halloween.

Kudos to the writers at Supernatural for this nugget of ingenuity! The show creator even
admitted in a 2006 interview that he chose Lawrence, Kansas as the demon-hunting brothers’ hometown precisely because of its proximity to Stull Cemetery.

Stull Cemetery is super-creepy and with good reason. Even if I had a loved one buried
there, I don’t believe I could muster up the nerve to visit their gravesite. It’s THAT creepy. I’m all for haunted houses and such, but who would intentionally tread on the same ground as Satan himself?

So many show up in the tiny town of Stull that they now post police to guard the
cemetery on the nights of Lucifer’s supposed risings. It was even banned to visit the graveyard after dark when in 1988 over 500 bystanders showed up hoping to see the Devil and caused a lot of property damage. Trespassing on these unhallowed grounds could now burden you with up to $1,000 fine and sixty days in jail. No thanks!

Interesting enough, on Halloween night 1998, permission was given to the Lawrence
Journal World and the Sunflower Cable Station Channel 6 News to stake out the cemetery. However, around 11:30 pm, an unnamed representative of the cemetery requested they be removed – just thirty minutes before Satan’s expected arrival.

Nothing to see here, folks!

More power to you brave people if you decide to attempt trespassing at Stull Cemetery. If
you get past the security fence and see Satan partying down on the smoldering ruins of the old stone church or amongst the dilapidated tombstones, please send me pictures!

Stull Cemetery has been crowned the most evil graveyard in America. But how did a
small cemetery in the middle of nowhere earn such a reputation?

Even since its creation in the 1850s by German settlers (the town went by the name of
Deer Creek until 1857), the graveyard has seen a plethora of paranormal activity – ghost
sightings, demon sightings, occult and satanic worship, witches, and reports of human sacrifice.

No wonder folks believe Satan pops up twice a year to stretch his legs and do the “Macarena” (or maybe he prefers the “Chicken Dance”).

The first reported incident was of a stable hand stabbing the town mayor on cemetery
property, precisely in an old barn that was converted into a church in 1867. However, the story doesn’t account for the fact there has never been a mayor in Stull so that’s a bit suspect.

According to legend the church sits atop a gateway to Hell created by Satanists after the
building was abandoned in 1922. Although burned by a mysterious fire (some say by the
community in an attempt to seal the door to Hell), and the roof missing since the 1920s, the stone building was finally torn down in 2002, but the owner claims to have not authorized its demolition and no one has taken credit for it.

Ghostly tales were handed down over the years since the town’s inception, but none were documented until 1974 when the University of Kansas student newspaper, the University Daily Kansan, ruled that Stull was deemed “haunted by legends of diabolical, supernatural happenings.” The article was the first to claim Satan paid visits to the small boneyard twice a year. As a result, over one hundred and fifty people overran the property on the Spring Equinox of 1978. The Kansas City Times published an article in 1980 that further fed the urban legend by reiterating the claim that Satan rose on Halloween every year in two places on the planet – one of those places was Stull Cemetery.

Whatever government office that assigns zip codes didn’t help matters when they inserted the cemetery into Topeka’s zip code which starts with…you guessed it…666, even though the town of Stull itself is 66050. Other geographic “evidence” is that the road leading up to the cemetery was named Devil’s Lane until 1905.

People have reported seeing smoke rising from the carcass of the old church. Others
insisted that an old wooden cross inside the church turns upside down by itself. Most interesting, and if I could get up my courage I’d check it out, is the story that when it rains, no rain falls inside the church even though it is missing a roof.

Other reports of paranormal activity stem from an old tree rumored to have been used to hang witches back in the day. One of the witches had quite a reputation as she was proclaimed to have been Lucifer’s lover and bore him a child. An old tombstone with the name “WITTICH” has been speculated to be the resting place of the witch-turned-lover. Personally, I feel bad for the poor woman, Anna A. Andrews Wittich (1832-1910) if she is innocent of these charges. Who wants “Satan’s Slut” as their family legacy? The rumored child was presumed to be born deformed and died shortly afterwards. However, he is said to stalk the cemetery as a ghost with a werewolf-like appearance.

After a particular hanging of witches from the tree on the Spring Equinox (remember this is when the devil shows up for his famous bi-annual rave), a man from the town went missing and was later found hanging from the tree. Covens visited the cemetery, and the tree, for years until the tree was torn down in 1998.

The lore gets a bit stranger as years go by. In the 1980s a group of teenagers passed
through the cemetery and experienced a strange wind gust. They ran back to their car only to find it not parked where they left it, but on the opposite side of the road and facing the opposite direction.

Even cultural icons have contributed to Stull’s story…

Now the Vatican probably will never admit it, or even acknowledge the story, but it is
reported that Pope John Paul II had his airplane diverted so as to not pass over Stull Cemetery in the early 1990s on his way to an appearance in Colorado. He claimed he could not fly over unholy ground.

Don’t give the Pope’s story any credence? How about pop star, Ariana Grande? For
whatever reason Ariana wanted to visit Stull Cemetery herself to see what it was all about. Apparently, she got the full scare-fest experience according to an article in Complex in 2013. Ariana stated that she felt overwhelmingly ill and could smell sulfur (common odor indicating demons). She and her entourage immediately left, but she apologized out the car window for disturbing the peace of the spirits there.

Miss Grande claimed to have a picture with clear “textbook” demon faces, but she
deleted the photo after seeing it took up exactly 666 megabytes. In addition, the computer folder she kept the photo in was aptly titled “Demons” and weird stuff happened until she rid herself of the photo. What weird stuff? Well, one night, Ariana closed her eyes to go to sleep only to be scared by a loud rumble right next to her. When she opened her eyes, the sound went away.  When she closed them again, she began to see disturbing images of red shapes and the noise returned with whispered voices. After moving to the other side of her bed for better cell service to call for help, she rolled up next to a black mass. Too frightened to do anything, she closed her eyes and eventually fell asleep. When she woke, the mass was gone.

Not sure I could fall asleep with a menacing black cloud sharing my bed. Some people are made of stronger stuff – or her mattress is “to die for.”

So what do you believe? So many unsubstantiated tales surround Stull Cemetery that
many dismiss the stories as simple rumors from the very beginning of the tiny hamlet of Stull up until modern times. No paranormal investigations have been conducted at Stull, the owner of the property and the town itself refuses all requests. But why exactly did the local police turn away spectators outside the cemetery just before midnight when Satan is said to make his grand appearance?

Doubts abound as to Stull’s diabolical history, but a common truth is that there is always
an element of verity in every urban legend. There’s certainly enough regarding the claim that Stull Cemetery is a gateway to and from Hell that this woman will never gather up the guts to make a visit to the old boneyard, especially not around midnight of the Spring Equinox or Halloween. But if you do, please look me up afterwards. I’d love to hear your tale.